Ancestry recently announced they updated their ethnicity results for people who took their AncestryDNA test. They’ve been saying for months my DNA sample has been updated, so I didn’t think much of it at first. I expected my Asian to disappear (because it is hard to trace), my European to rise, and more ethnic diversity in general. What happened? Haha, Norway and European Jewish appeared, my African and European total percentage did not change much and my Chinese? Let’s talk about that.

Originally, my DNA test said I descended from Asia East, a broad location. I found out I had Asian DNA before I took the AncestryDNA test due to the way my body responds to medicine (my body does not respond to some medications that are known not to work for people of Asian descent).

Via my DNA matches, I found out I am part Chinese. Via a Chinese DNA match, I found out I descend (based on their family history), from the Chinese ethnic group Gaoshan, which some believe originates from the Yue (Chinese) ethnic group. The Gaoshans joined other immigrants from Borneo, the Philippines, and Micronesia. Eventually, a large number of Gaoshans settled in Taiwan. This confirms what an Asian based DNA testing company results showed: Gaoshan.

To be honest, as for my ethnicity, the Asian portion is what held my attention the most due to my medical situation. I know I’m part African American, I know I’m part European. I thought I was part Native American (my DNA does not support that) but that seems to be a universal myth that many people of color were told. It is understandable where some families would want to keep the past in the past and not discuss the horrific circumstances of slavery. I took a blood DNA test many years ago for a study and was told the Asian they found was most likely from the Native American ancestry I thought I had at the time. It wasn’t.

Today, I looked at the updated ethnicity results for my AncestryDNA results and saw:

The new ethnicity results proved my Chinese descent. I see why Ancestry is saying Philippines because of the population numbers, as there are many Gaoshans that live in the Philippines. However, for my history, my ancestor migrated to America, not the Philippines. Family history supports this and, obviously, me having Chinese DNA supports this as slaves had no rights back when my ancestor was conceived. It is hard to document because census records ignored racial differences. For example, the 1850 census asks if the person is black, white or mulatto. That’s it. The first Chinese migration was around 1815. By 1880, there were over 300,000. Before slavery was abolished, due to the One Drop Rule, having one African ancestor, made you black regardless of the ethnicity of the parents. Trying to document ethnicity for people of color is extremely challenging without DNA.

What about my other results?

In my opinion, the results are more concise and less noisy. That does not mean they are more accurate. For example, I know from family history I have one Senegalese great grandmother. Everything told to me from this family history has been 100% correct (as in I can document it) so there is no reason to doubt the story of where my great grandmother came from. The initial DNA results proved this so I thought nothing of it. The new results remove it completely. That’s annoying but let’s look at this realistically. This is how many grandparents we have: 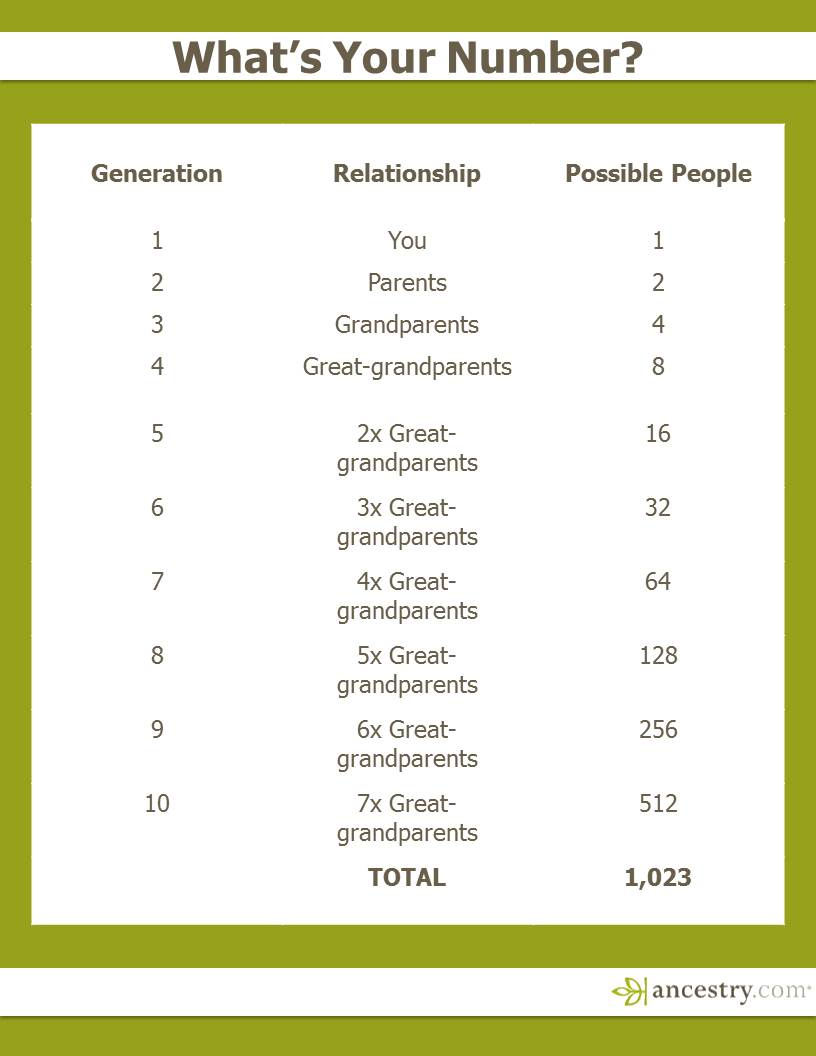 Due to the sheer number of grandparents I have, and the circumstances of slavery, what are the odds that Ancestry would be able to accurately determine my ethnic makeup? Low. Very low.

Remember the Irish family, that lives in Ireland, that contacted me wondering how we were related and I talk to from time to time? Yet, I’m not Irish. /facepalm

I give them credit for trying. I suppose the foundation they are building now will be great if I ever have great grandchildren. For newer generations, this is great and the accuracy will be more solid. The caveat: the connections to the past (1800s and beyond) are slowly dying. Testing people in 2018, as a reference sample, cannot accurately predict what happened hundreds of years ago. They would need much older DNA.

So…I’m from Africa, Europe and China. Do I have other racial mixes? Yes.

The answers, for everyone’s personal history, lies in the DNA matches, not the ethnicity estimate.

Read More
The theme of this update: nothing matches. I’m making process but there is a lot of inaccurate information out there.
Read More

Read More
A progress update on the my family tree. I’m making progress, but I still have tons of research and sourcing to do.
Read More

Read More
Ancestry removed pagination for navigating through DNA matches. I talk about why I think they did this. I don’t like it.
Read More

Read More
I am blown away by what I am finding out about my family through DNA matches. I have family in places I would have sworn I didn’t.
Read More