Is it wrong to make a business suggestion to a friend? RM made a suggestion to Jungkook and it set the internet on fire. Let’s talk about it.

BTS released their 4th Muster DVD recently. It shows their Muster event and behind the scenes. In one part of the behind the scenes, it shows Jungkook watching G.C.F in Tokyo, the first video he directed. Jungkook went to Tokyo with Jimin and from the video, it seems like they had a great time enjoying their vacation.

Back to the DVD, you can see Jungkook watching his video and he’s quite proud of himself. 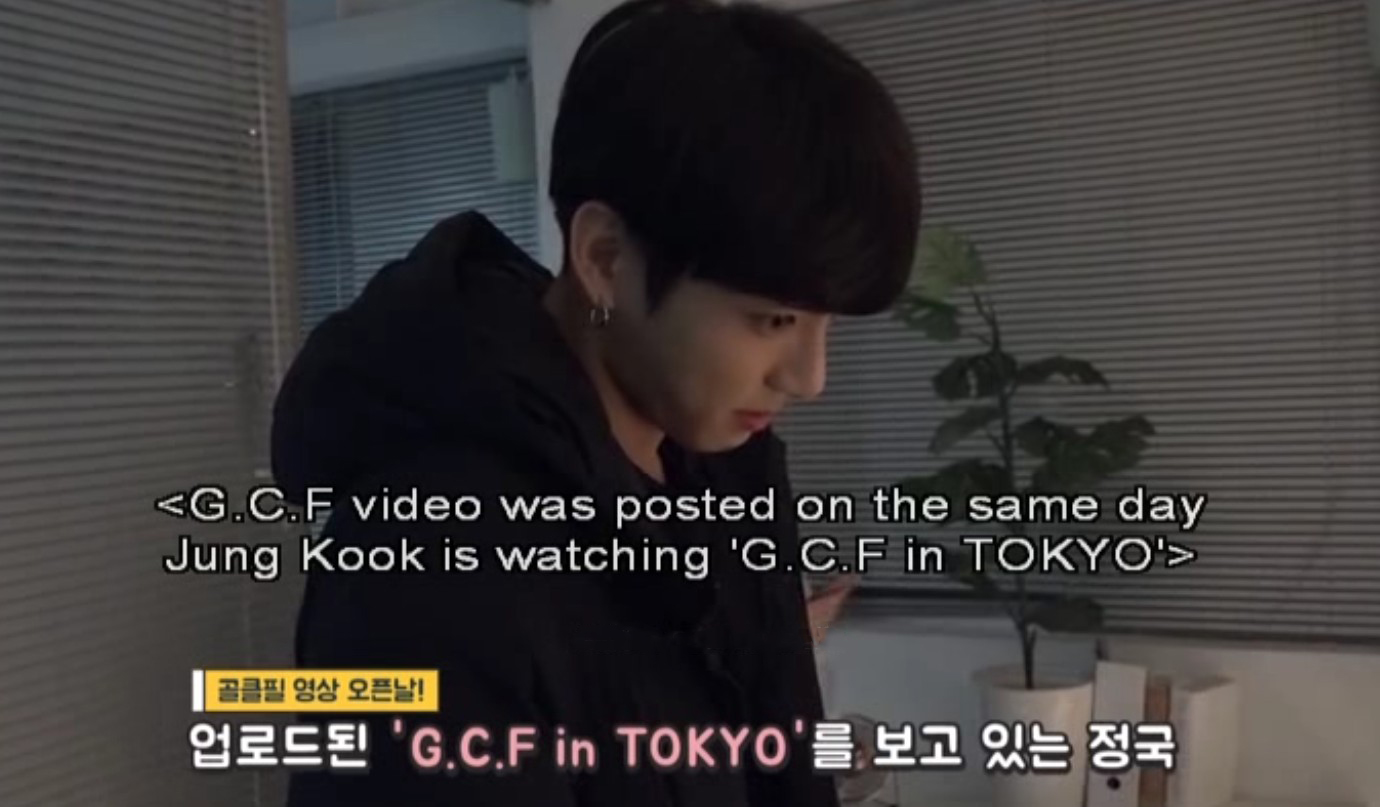 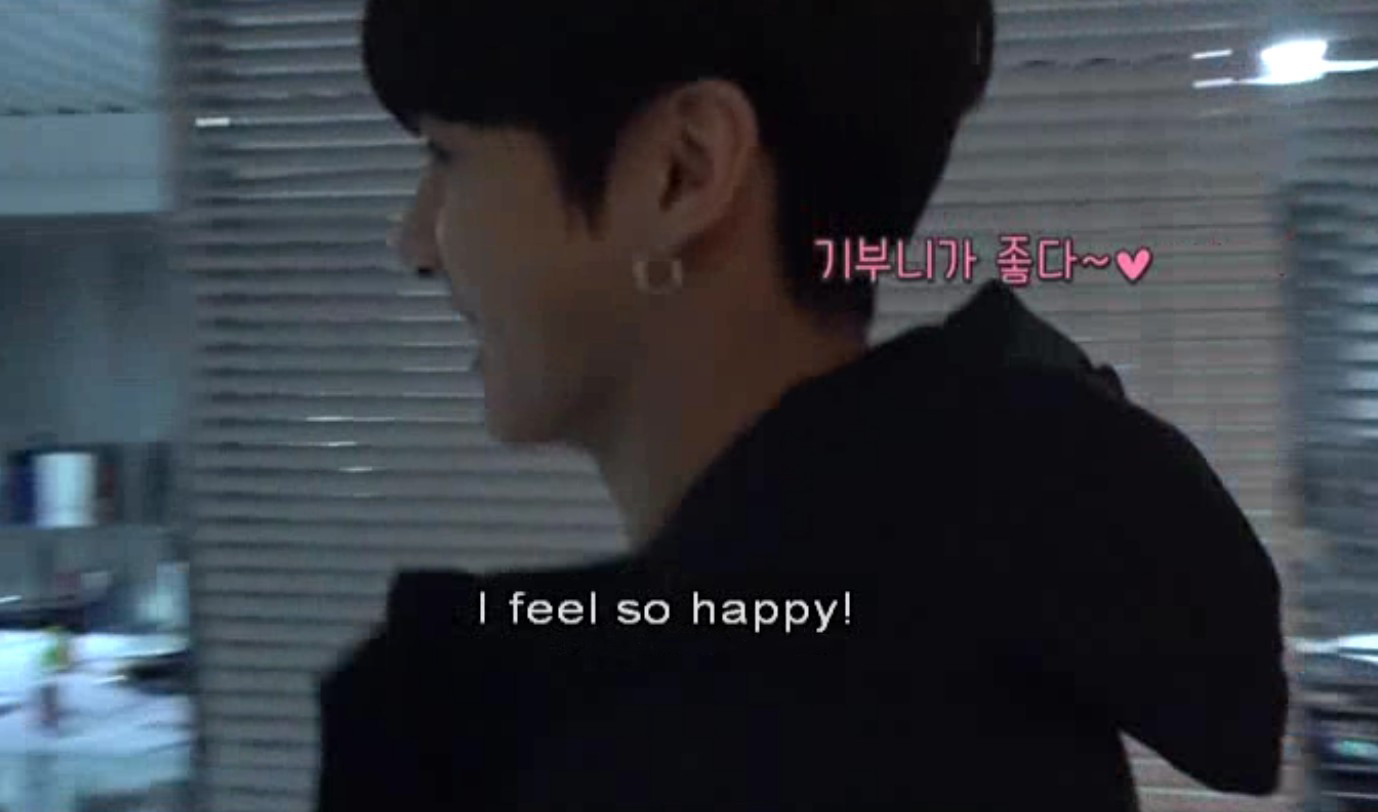 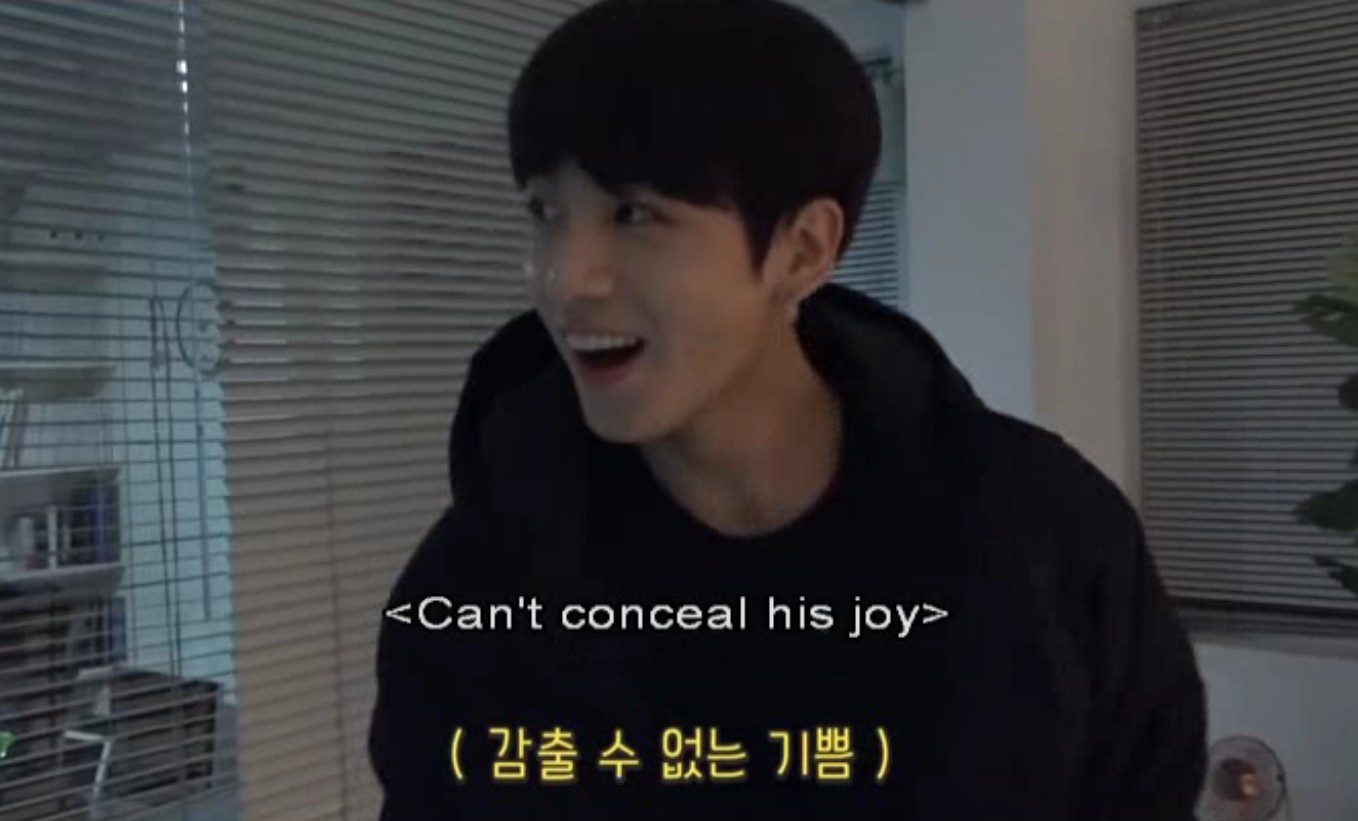 The segment moves on to talk about the name of his studio, Golden Closet Films. Jungkook explained he picked the name because he started off working in a converted closet. Everyone compliments him. The next part is what some considered controversial. RM, another member of the group, suggests using V (another member of the group – there are seven members in total) as the main model in Jungkook’s next video because, if he does, he will easily receive 1 million viewers. 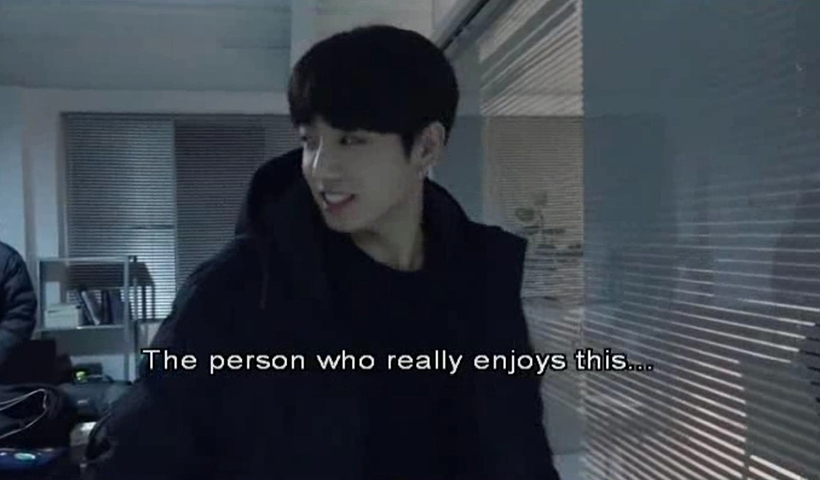 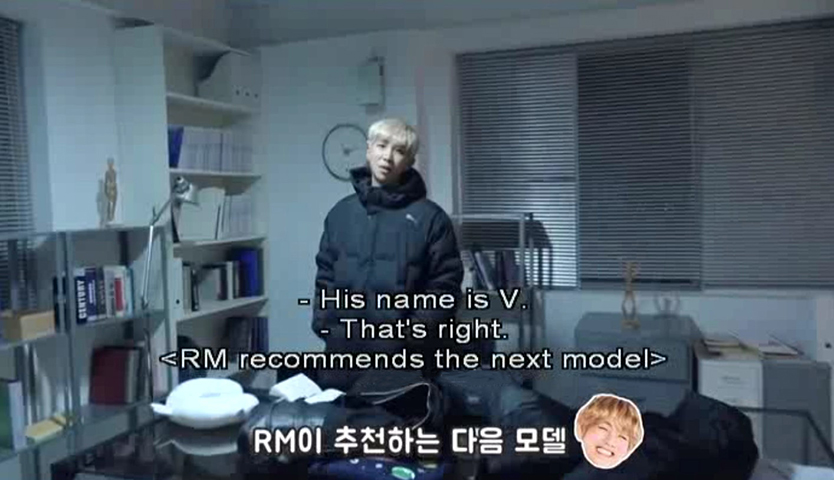 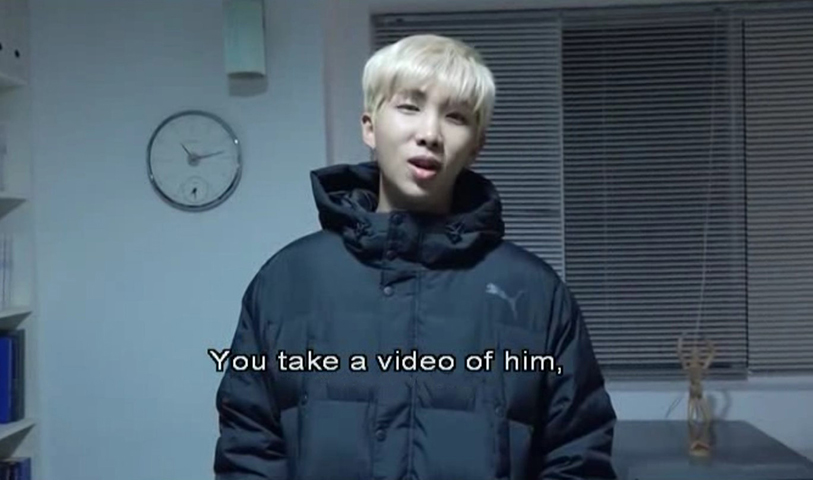 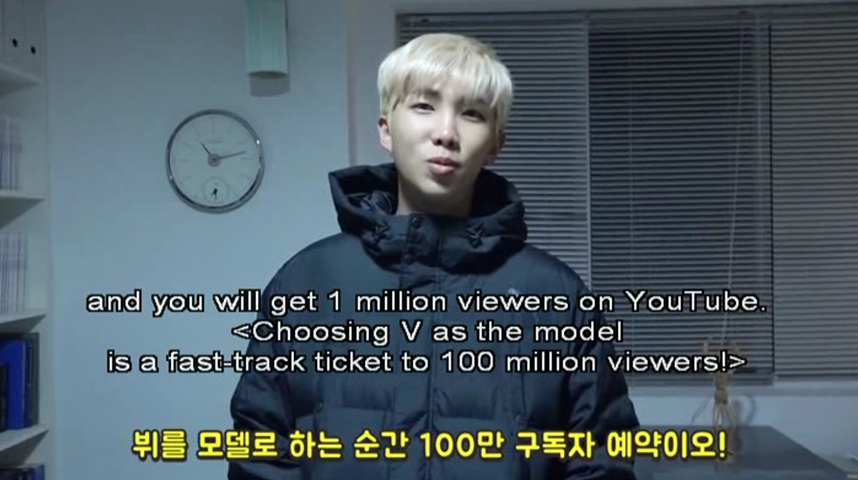 Honestly, this is a solid piece of business advice and it is also true. Making V the focus would garner a lot of viewers because V has a large fandom (viewers). V’s fandom will not ignore a video V is the focus in. V’s fans ate this up, seeing it as a compliment to the “power” that V has.

There were fans that felt this was insulting to both Jimin and Jungkook. Jungkook was excited about his achievement in completing the video, the video had just been released and was felt (by some) bringing views into the picture and saying the video would do better with a different model was rude and insulting. And of course, there was the “Jimin can’t bring in a million views?” argument as well (he can, easily).

To be honest, most of the people complaining about this are fans of Jimin and (unfortunately), the vocal minority feel that he is being unjustly treated 90% of the time. They victimize him in a way that would be fascinating if it weren’t so sad. It’s sad because Jimin doesn’t see himself that way. He sees himself as a fire-breathing dragon.

I could do a post about their “poor Jimin” stance but that is not the subject of this article. To be clear, the reason why they are upset: the video wasn’t just about the trip (for them). It was disclosed that Jungkook personally purchased the tickets for the two of them to take the trip as a birthday gift for Jimin. The trip was rescheduled because their trip information was leaked. They went alone on the trip and did their own thing. Jungkook recording Jimin was one of the things they did. They had so much fun on the trip they kept talking about it during interviews the group was doing. Japanese news media talked about their vacation multiple times. Their personal vacation ended up being a part of the 4th muster, which is why the topic came up in the first place.

This video is precious to them so don’t you dare say anything in anyway that might diminish it.

Those of you that have even a minimal amount of business knowledge might be confused because, for example, when you take a personal vacation, you don’t upload it to your employer’s server…do you? No, you don’t. You don’t talk about it during business events, do you? What if I were to tell you that Jungkook’s employer (the CEO of the company) encouraged him to direct because he felt he had natural talent?

When you take personal videos, do you call the people in them models, actors and actresses? Of course not, it would be more appropriate to say my friends, spouse/partner, family, etc. It’s looking more and more if G.C.F. videos will eventually have a business purpose. Jungkook may have been inspired by the personal trip he took with Jimin to create the video but somewhere, the expectation is clear, that Jungkook should make “other” videos not Jimin focused. The topic kept recurring over the upcoming months. Jimin addressed it during a fan sign. 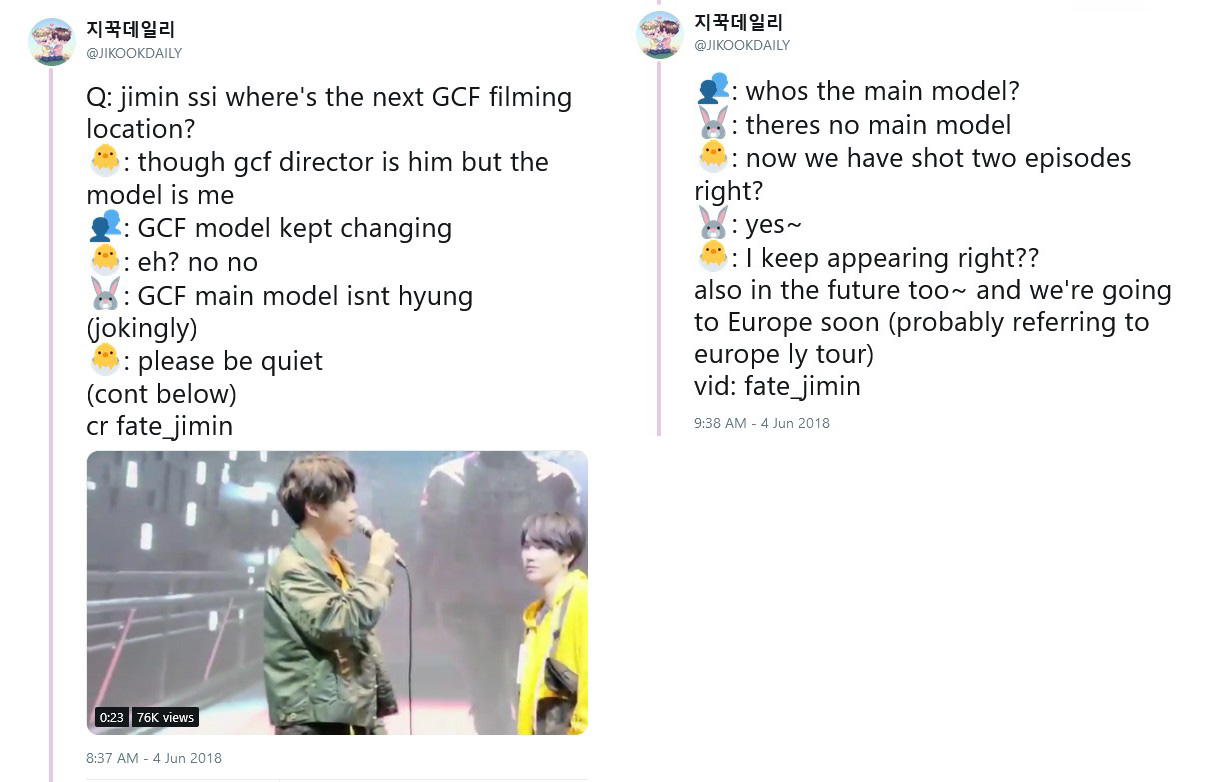 As new videos came out, they were cleverly edited to include more focus points and most of them focused on Jimin. Except the last one.

This one had V as the “main model”. Newark is very different from Jungkook’s other videos. Newark was recorded while on tour. Jungkook did not bring his camera equipment with him on tour so the quality of the shots in the video is lower than his other releases. Newark shows the work that goes behind what they do. Many people who watched the video were surprised and enlightened at how their work is like a “job”, which is amusing to me because many of those people have all the [wrong and inaccurate] business advice they can’t help to suggest, but it shows that large amounts of people had an unrealistic view of the entertainment industry when it comes to idols.

Back to RM, he made a valid business suggestion to Jungkook. RM also said Jungkook would prefer to die than give up his passion. 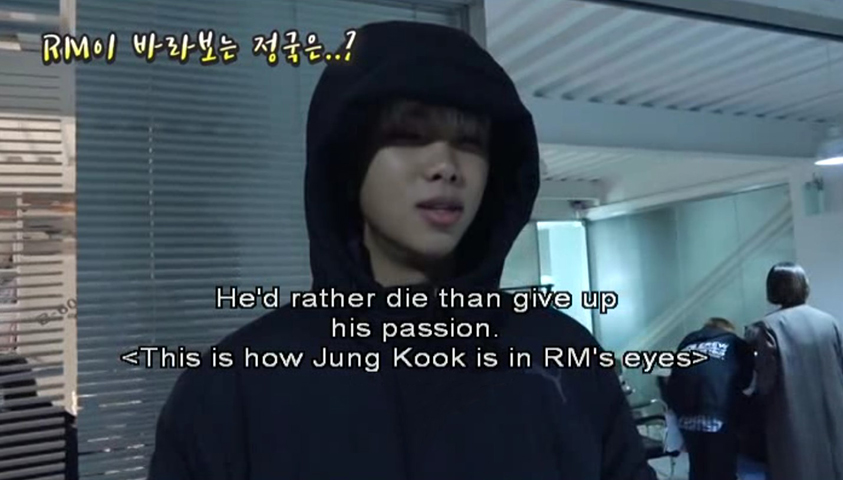 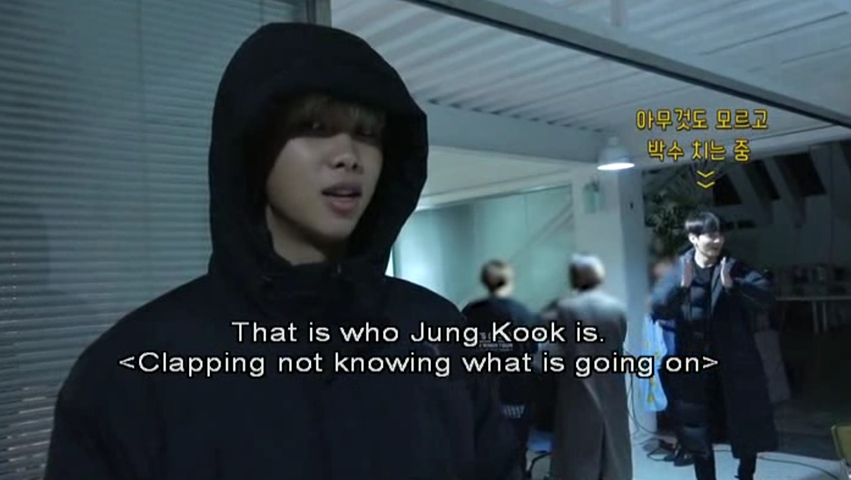 What does this mean?

Even RM realizes that Jungkook is dedicated to what he is passionate about. Whatever inspires Jungkook to record and edit videos, he will stop doing it if that inspiration goes away. Jungkook started uploading pictures under the Golden Closet Photos brand.

They made the choice to not have personal social media accounts for one very good business reason: it pushes everyone to one spot, resulting in higher numbers (more negotiating power). If they had separate social media accounts it would water down their numbers and divide the fandom more. It makes more sense, from a business standpoint, to keep them together. That doesn’t mean they won’t desire their individual spaces – I hope they do it one day if it is something they desire to do. If they do, they will have situations like SHINee and GOT7 where member individual accounts can overshadow the company account. For example, the SHINee main Instagram account has 2.6m followers. Key’s has 6m. For GOT7, the main account has 3m followers. Jackson’s has 11.4m followers.

The caveat to this: there isn’t a place for Jungkook to place “personal” videos outside of the group. The same goes for Jimin or V’s photographs. They all end up going in a shared space. For the most part, the other members keep their personal time private. They don’t share photos, videos or even experiences often. This makes the G.C.F. in Tokyo video even more unique as it bleeds “personal” time with work.

There is one more aspect I want to mention: if the Bangtan YouTube channel is monetized, RM suggesting a method to receive more viewers would be in the best interest for them earn more money. There is no “me” in team, it’s “we”. Is it fair to ask the other members to sacrifice potential income? While I personally would encourage personal growth and doing what is passionate over money, I cannot blame others who min/max options for maximum profit. It’s business.

What Did We Learn?

To be blunt? The V and Jungkook are paired together (along with other members with V) because it makes them money. It was obvious before but now it’s out there publicly. Of course there will be people that deny it, but it’s right there. It wasn’t mistranslated and G.C.F in Newark backs it up. It’s a job. There are business decisions to be made, the fandom might not like some of them. Speaking of not liking something, RM’s words puts this in perspective. 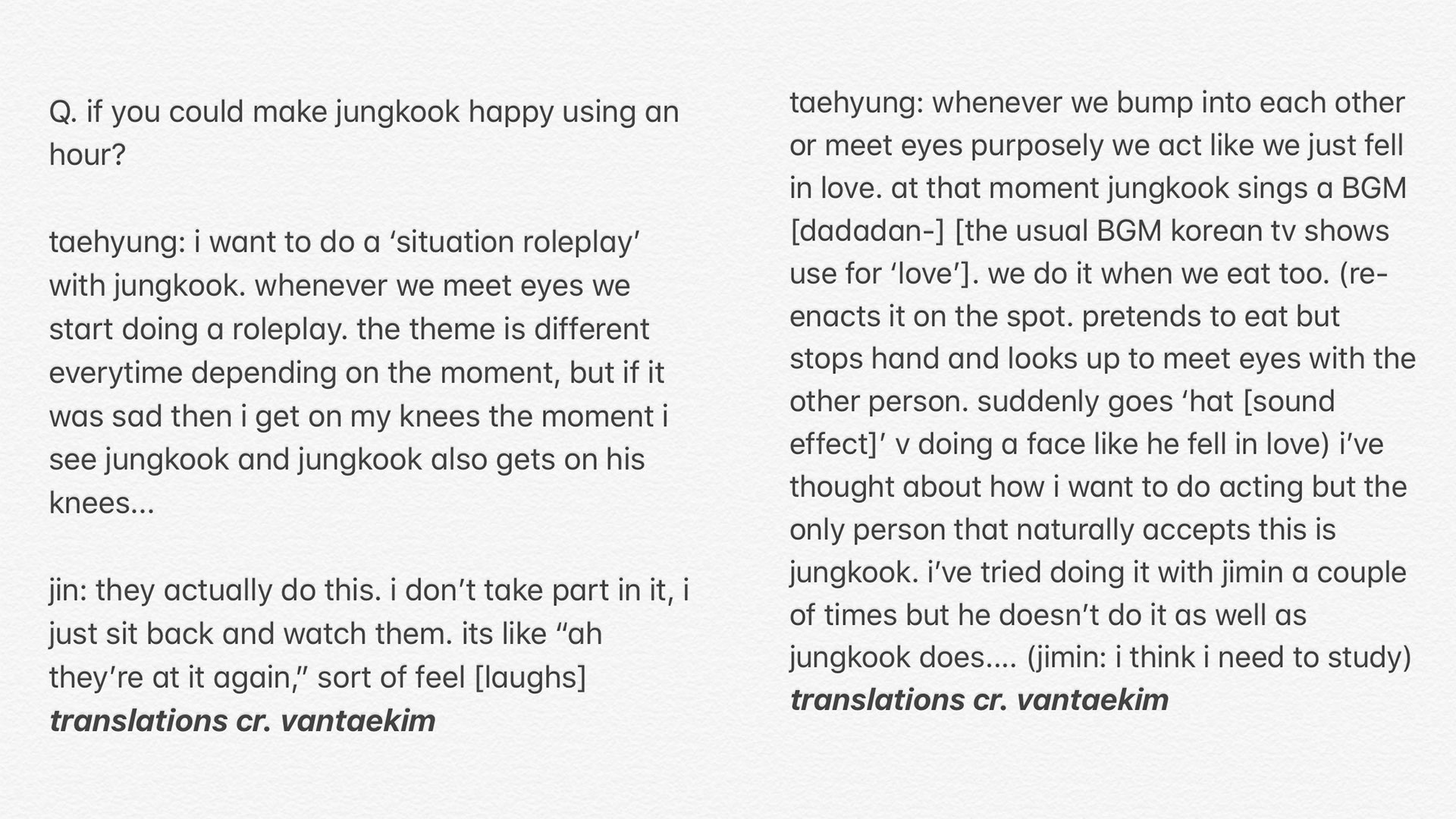 When I first read this, my jaw dropped. The translator didn’t realize the implications of what she translated but I will always be grateful she translated it. I confirmed the translation is accurate. V is always acting for the camera but this perfectly explains why V has so many fans and why pairing Jungkook and V together is a money-maker. They practiced the looks V’s fandom has fallen in-love with.

While I do not see RM being out of line making the suggestion, especially since he realizes Jungkook is loyal to his passion(s), I hope they show more interactions like this even if it upsets part of the fandom. Why? Because it is real life. These are the types of business decisions the group needs to make as a whole and individually. Wouldn’t it be a sad world if people who are close to one another cannot make a suggestion? Is it hypocritical that the same people who are upset at this suggestion have tons of suggestions for Bang, the CEO of the company and BTS? Yes, it is. Their unwanted and unasked for advice floods the internet, “suggesting” what the members should do (to the point where they actually say they should “be made to do” something). BTS addressed this behavior in their latest video: IDOL

Can they be any more blunt? Mind your own business. They’re never going to change, they are going to continue being themselves. They aren’t listening to the unwanted and unasked for suggestions. The same goes for Jungkook. He will ignore them as well, no matter who they are from, unless his job requires him to make videos he might not prefer to make. Welcome to the world of being employed! Is there anyone who has worked a significant amount of time as an employee that hasn’t done something, as part of their job, that they didn’t want to do? That’s rare if they haven’t. That’s why people become entrepreneurs but even then, things will come up one might not want to do but is part of the job.

Time will tell what Jungkook releases in the future. I hope the members continue to suggest things that might help the others thrive, and give them freedom to make their own choices. There are many people who wished they had friends who made suggestions like RM made; ones that might be financially beneficial.

I look forward to Jungkook’s next video while he still has the passion to create them. When that day comes that he decides he no longer wants to make them, I fully support his decision. Be happy.

Read More
A friend of mine sent me some Obama photos. The above photo is my favorite one. Looking at…
Read More

Read More
Niche blog awards are a good way for minority bloggers to gain recognition for their achievements. Door can close on you due to your race.
Read More 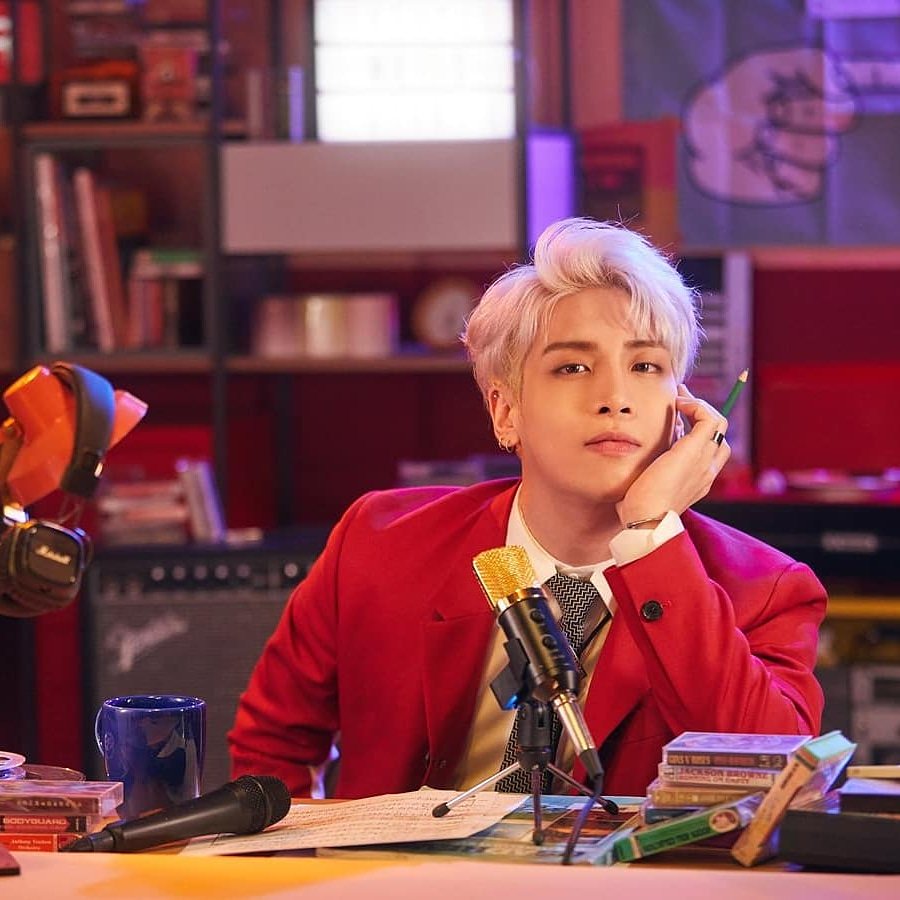